NTT Inc. - Safe Distance from Arc Flash: What is it for Industrial Employees? 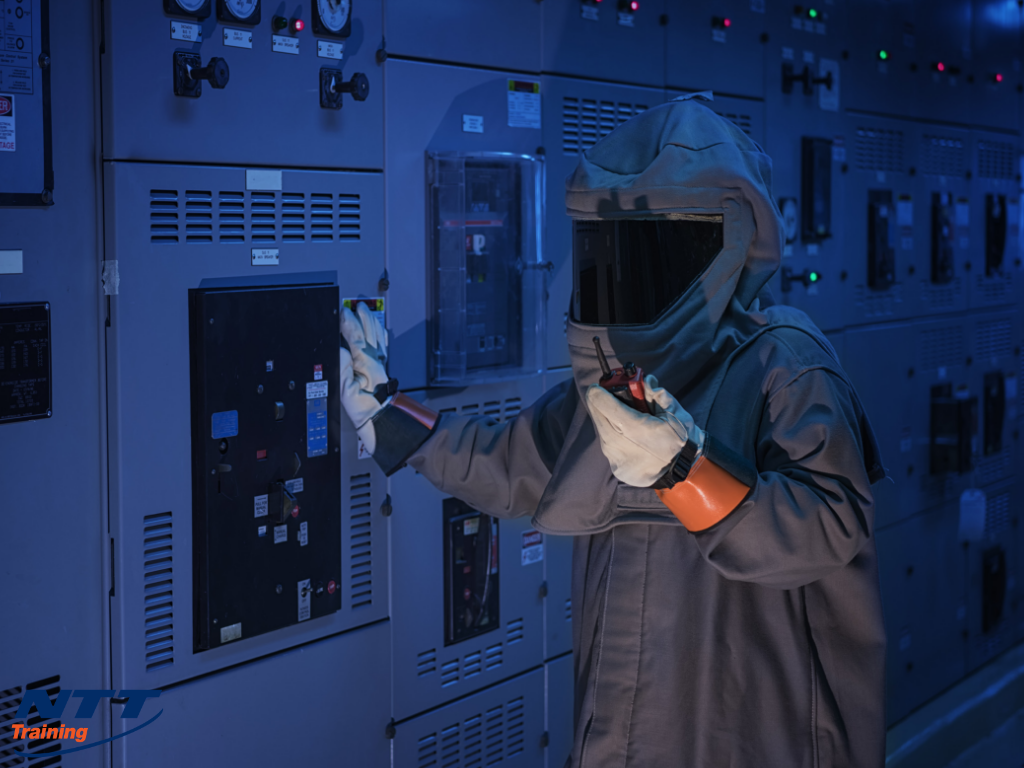 Safe Distance from Arc Flash: What is it for Industrial Employees?

The term “arc flash” describes an unwanted, rapid, and dangerous electric discharge that travels through the air due to an arcing fault between several electrical conductors. The cause of the short typically burns away after a few seconds but highly conductive plasma (ionized gases) is established to sustain the arc fault.

The plasma will then conduct energy, resulting in the release of massive energy that burns the bus bars, vaporizes the copper, and causes a fiery explosion. The flash is immediate and happens in a fraction of a second, but the consequences can be devastating for anything in its path.

Incidents of arc flashes often occur by human error, e.g. when workers carelessly drop tools on live parts or when they fail to ensure that equipment is properly de-energized. Other causes include:

How Dangerous is an Arc Flash?

An electrical arc flash can reach temperatures of up to 35,000 degrees F, about four times the temperature of the sun’s surface. The intense heat results in a sudden expansion of air, which causes an invisible arc blast with a very high air pressure wave.

The explosion has enough force to push a worker off a ladder or throw them across rooms, rupture eardrums, or collapse a worker’s lungs. What’s more, the combination of pressure and fire will blow electrical equipment apart, sending blast shrapnel into a worker’s body.

An arc flash can cause second- and third-degree burns if the victim is several feet from the arc. Staged tests have shown temperatures of up to 437 degrees F on the hands and neck of an individual standing at a distance of 10 feet from an arc blast.

The burns are caused by extreme heat and metal molten splatter. Worse, clothing can be ignited and the synthetic fabrics can be melted to skin. Other arc flash injuries include nerve damage, hearing loss, blindness, and cardiac arrest. Arc flashes can destroy property and lead to the death of personnel present within the arc flash boundary.

What is Considered a Safe Distance From an Arc Flash?

The extreme, radiant heat given off by an arc spreads out in all direction, getting weaker as it dissipates farther from the source. For this reason, NFPA 70E includes a “safe distance” to minimize the risk of burns and other arc flash injuries to individuals in proximity to energized electrical equipment.

When an arc flash hazard exists, workers must be able to determine their relative risk and a safe distance from the equipment in order to limit injuries to a treatable level. If a worker has to cross the boundary to handle a task, they must wear appropriate personal protective equipment (PPE), such as flame resistant (FR) clothing, to protect them from life-altering injuries.

The Restricted Approach Boundary: This boundary is in close proximity to a shock hazard and may only be crossed by qualified persons. To cross the boundary into the restricted space while the equipment is still powered, personnel need to have been trained, have a written and approved plan for the work they’ll perform, and be wearing the correct PPE.

What Are the Benefits of Formal Arc Flash Training?

Asking your workers to do some online research or watch YouTube videos is not enough to ensure they have the training needed to avoid deadly missteps when working with or around electricity. Many electrical accidents are preventable because they’re often caused by unsafe equipment or unsafe work practices.

As such, it’s important to send your employees for arc flash training to have them understand the conditions that could lead to arch flash as well as the correct safety gear, PPE, tools, and safety procedures that will help prevent injuries while they work with electrical current.

Your employees will be able to assess the area, listen for unusual electrical activity, look for potential arc flash contributors, and identify the smell of burning insulation. They will also learn how to operate machines and use tools in the safest way. In essence, your workers will learn everything about arc flashes and how they can reduce the chance of related catastrophic accidents.

Arc Flash Electrical Safety Training offered at NTT Training is the most basic element for electrical qualification. This hands-on training is based on the NFPA 70E and helps establish a safe working environment. Contact us today for more information.